The largemouth bass is a kind of fish that is widely pursued by fishers and anglers. These fish come in a variety of sizes, with several people across the world managing to catch lunkers.

This fish is not only abundant in the United States in states like Georgia, Mississippi, and Alabama but is also widely found in Japan, Mexico, and Canada.

Among these catches, then, what is the largest largemouth bass ever caught? Who caught it, where, and how? Currently, there are two such people that hold the record, although the official world record is held by George Perry.

You can learn more about both of these in further detail below.

The official largest largemouth bass ever caught weighed 22 pounds and 4 ounces. It was caught on June 2, 1932, by George Perry. He caught it in Lake Montgomery of the Ocmulgee River in the state of Georgia.

This is an oxbow lake that formed as a result of a bend in the river, resulting in an environment ideal for fish to thrive. In particular, this lake houses numerous large largemouth bass that generally come out to the shallower parts for some food in the form of smaller fish.

George Perry, at the time, did not intend to go about forming a world record since the criteria for this record did not even exist back then. He was 19-20 years old when he went out to the lake with a friend to catch some fish for the next meal.

He used crankbait to catch this fish that he then weighed on his way back home. His catch only started gaining recognition due to the competition held by the Field & Stream magazine in which he won the prize. It was only a couple of years later that his feat was established as a world record.

The International Game Fish Association (IGFA), which governs and establishes these world records in fishing, went on to establish George Perry as the record holder, which continues to hold up even today.

There is only one photograph of George Perry holding the fish, which only surfaced several years after the achievement.

As a result of this world record, George Perry’s name became well known. Due to his achievements and because the lake often produces such large fish, there are numerous anglers that tend to visit Lake Montgomery.

In fact, this record also led to the largemouth bass becoming the state fish of Georgia.

Interestingly, however, it was only in 2009 that someone managed to officially tie this world record that Perry went on to hold all by himself until then. Let’s look into this other record below.

On July 2, 2009, a man named Manabu Karita caught a largemouth bass that weighed 22 pounds and 5 ounces. He caught this fish from Lake Biwa in Shiga in Japan, a country where these fish are not naturally found but have come to be introduced.

However, they are invasive in Japan, with efforts being made to get rid of them from the lakes in the country.

Even though the weight of this fish is technically an ounce higher than the fish caught by George Perry, the IGFA continues to hold Perry’s record as the official one while labeling Karita’s record as a tie. This is mainly due to this organization’s policies and criteria regarding the requirements for breaking a world record.

These criteria state that in order to break a world record and form a new one, the overall weight should exceed the original by at least two ounces. Since Karita’s fish only exceeds it by a single pound, the two fish are counted as a tie.

In fact, just to establish this record as a tie, the IGFA required Karita to take a polygraph test to establish that he was telling the truth. There are also several photographs of Karita’s catch as well as of him holding it.

Overall, in terms of length, the bass measured around 29 inches. Karita used bluegill as his bait to catch this fish and when he succeeded, he did not think it was as large as it actually is.

It was only upon weighing it and through his pictures that the size of the fish came to be determined, established and entered into the world record. The mouth and the underbelly of the fish proved to be as large as the fish caught by George Perry.

Apart from George Perry and Manabu Karita, nobody else has managed to break the record, although people have certainly come close with their catches weighing anywhere between 15 and 22 pounds.

Catching Your Own Large Largemouth Bass

If you want to catch your own large largemouth bass, there are several factors and tips that you should keep in mind, some of which include the following.

In summary, the largest largemouth bass ever caught was by George Perry in 1932 from Lake Montgomery in Georgia in the US.

This weighed 22 pounds and 4 ounces. His record is tied by Manabu Karita, who caught his fish from Lake Biwa in Shiba in Japan.

This weighed 22 pounds and nearly 5 ounces, but because of the IGFA rule, he did not break the original record. 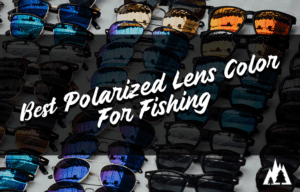 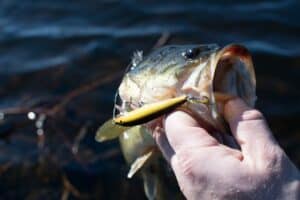 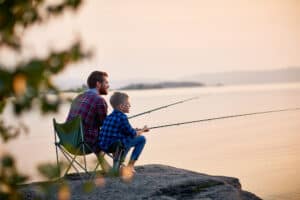 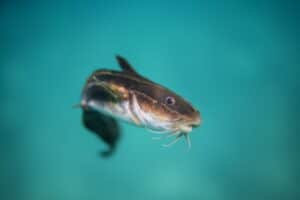 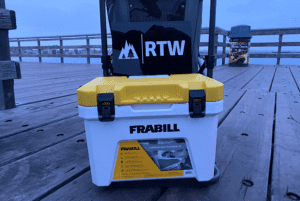 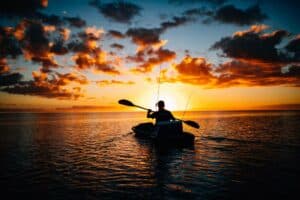